Showing posts from August, 2008
Show all

An Old Riff from the last election year.

August 22, 2008
Dug this one out of the past. It was when my column was being carried by the newspaper in Belleville, MI.
Hmmm, not much has changed since I wrote this 2003.

CLIFF'S RIFFS: Cut benefits for lawmakersBy Cliff Yankovich
PUBLISHED: December 25, 2003
As an election year is fast approaching, we need to get our heads out of the sand, ignore the distractions of what the political parties want us to concentrate on and focus on some issues that are strangling taxpayers -- be they Democrats, Republicans, Greenies or whatever.
Are you aware that Congress members draw their pay until they die? The program that pays them is not tied to Social Security -- representatives and senators do not collect from Social Security, neither do they have their paychecks shortened by any Social Security withholding.
No, the boys and girls we elect will draw paychecks until death (with pay going to surviving spouses until they die) thanks to a program instituted many years ago. They don't pay a single cent into …
6 comments
Read more

In which Cliff explains his Olympic habit.

I am not a big fan of televised sports. Rather I should say I am not a big fan of the commercials which accompany televised sports. Every four years I make an exception for the Olympics. Man, once I pick them up I cannot put them down. I am good for 3-4 hours on the couch watching whatever they throw at me - gymnastics, swimming, track, volleyball, diving (how have I missed syncronized diving before??), trampoline (that was a new one for me), etc etc.

Last night I had weird dreams filled with short muscular people dressed for track and gymnastics.
I CAN"T STOP!

Just kidding.
I can handle it.
Really.
I can quit any time I want to.
No problem.
Post a Comment
Read more

Cliff rides in the March of Dimes Ride for Babies.

August 19, 2008
This will be my fifth year riding the bike to raise money for the March of Dimes.
I started initially because I was doing a story for the newspaper I write for. Got hooked and have been going back ever since.
I got to meet some people who have been helped - and whose children are alive - because of the March of Dimes.
Anyway, I would love to have YOUR support. You can donate online here:

Stuff That Works: My 3rd set of Tomahawk Tires with Dyna Beads. 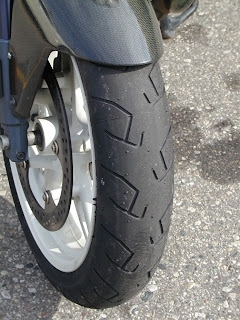 Nothing quite like the feeling of new tires on your bike, is there? Dang, I like it alot. Had my new friend Dan Stadt, http://www.stadtcycle.com/, install a shiny new pair of my favorite re-manufactured tires on the Snow Queen (my 2004 BMW Rockster SE ) yesterday. I probably could have made the 120 mile trip down to SeriousRacers place, but I did not want to push my luck on the old set - My last set of Tomahawks were good for 10,422 miles.

The company that makes Tomahawks also make re-manufactured tires for AIRPLANES so I have a lot of confidence riding on them. My stock set of Dunlops were squirrley and the back tire was gone with less than 6k on it. I have been riding on Tomahawks ever since and the bike has just under 33k on it. (Did I mention that I plugged a nail hole in the middle of the tread on the rear and rode on it for another 5,380 miles one time?)

A set of Tomahawks for my bike are $150 plus $18 to ship them. I have ridden on Metzlers, Dunlops, and one other brand on the…
Post a Comment
Read more

August 09, 2008
Mamas, don't let your babies grow up and buy Vista.
A few months ago we bought a new Sony laptop complete with the Vista operating system. Buyer BEWARE. If you are shopping for a new computer, try to get one with XP or use some other operating system.
All kinds of problems with Vista. Examples:

The clock cannot be set to the correct time. No matter how many times we set it to EST, it automatically resets itself for 1 hour earlier.

If you type too fast or click back and forth while surfing or posting on the net, then the computer just freezes up with a clicking noise.

A couple of weeks ago we could not turn the machine on. Nothing would work. Thank God for the Geek Squad at Best Buy. They told us to remove the battery, wait 15 minutes and then turn it on a…
2 comments
Read more

The Kelley Boyz get down with Los Lobos 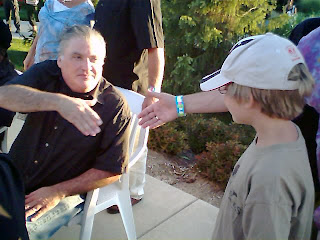 Christopher Kelley (in the hat) looks on while his dad shakes hads with David Hildago of Los Lobos.

Here is a great story - I am going to let the "proud papa" tell it. A friend of mine, Rick Kelley, and his sons had some great interaction with one of my favorite bands - Los Lobos. Here is what Rick reported in an email:

"Last year's Los Lobos concert at Meijer Garden turned into a fun-filled quasi-free-for-all wherein the members of the band invited the audience on-stage during the finale. About 60 concert goers including Chris took them up on the offer. When the show was over and the audience began clearing the stage, Los Lobos' leader David Hidalgo leaned down to Chris and, handing him his guitar pick, said, "you look like a guitarist." The spontaneous moment inspired the young lad who has practiced his guitars relentlessly since and taken to always carrying a guitar pick in his pocket wherever he goes.Fast forward to last night and Los Lobos' thir…
Post a Comment
Read more

Lopez Lomong is chosen to carry the flag. YES!!! 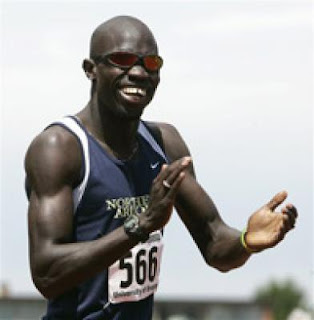 Yup - you can say the Olympics are a waste of time. They are at least as much about political hoo-haa as "pure athletics". China should not be the host. Etc. Etc. Etc.
HOWEVER - if you take the time to look you can still see some bright lights here and there. Consider that runner Lopez Lomong has been chosen to carry the US flag in the opening ceremonies. That is good enough for me. Outstanding.
If you don't know anything about this guy, may I suggest you search him out on the net and read his story. One of the most amazing sports/human interest stories I know of. When I saw the special segment on HBO's Real Sports it had me in tears when he was re-united with his mom and his family.
Or you can read about him here: http://lopezlomong.org/
See - good things are still happening in the Olympics - even if they are being held in polluted old China!
Post a Comment
Read more
More posts