Showing posts from March, 2011
Show all

Charmin ad - are you kidding me? 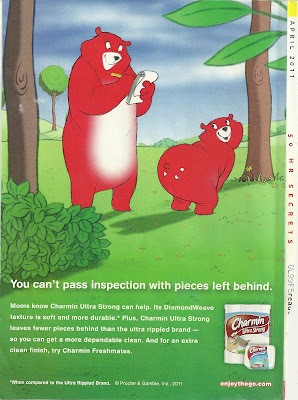 Look at this new Charmin ad - sad to say it was in Reader's Digest, who also ran a 1/2 page ad for Judgement Day on May 21st of this year. Times are tough and even Reader's Digest has to scrape the barrell for ad bucks.

Several questions come to mind: 1. Is this a problem for America - bits of TP stuck to our collective hinneys? 2. Who is inspecting whom for said bits and why? 3. How do they know the new Charmin leaves fewer pieces behind?
I just realized the correlation between this ad and the one for Judgement Day. This kind of lame ass ad COULD be an indication of the end of the world. Thanks Reader's Digest for keeping me on top of things that matter.

What is it about President Obama?

What has he done to inspire such vitriol or any kudos? I am mystified.

Let's see. Any big changes in foreign policy? Hmmm, we took some troops OUT of Iraq, but we put a whole bunch more in Afghanistan so that pretty much balances out. Our young men and women continue to lose their lives and limbs in the desert over there and we continue to spend over 120 MILLION DOLLARS every day in those two countries - things are moving along at the same pace as when Bush the Second was in charge. Suicide is a HUGE problem in the Armed Forces just as it was when GWB ran things. Gitmo is still open for business.
On the home front Prez O continued to write the bail out checks to "free market" Wall Street that Prez B started. He has done nothing to punish anyone responsible for the greatest financial meltdown since the Great Depression. The tax breaks that Prez B initiated hav…
1 comment
Read more

Another song on SoundCloud

The impact of a small (micro) business.

March 09, 2011
There has been a lot of discussion in our local paper about supporting local businesses. The Lowell community is really great at this - they want to see local shops and service providers succeed.
Last year we helped our daughter Ella (re)open a coffee shop here in Lowell. (you can learn about it here: http://www.ellasoflowell.com/). Julie and I were convinced that our favorite town needed a place for good coffee and fresh soups and sandwiches.
One of our goals at Ella's was to keep as much of the money in the local/regional/state economy as we could. We buy our meat from Gary's - a butcher shop a block away and we buy milk and other things at the local Meijers. Ella has soap and various products from Lowell area artists. ALL of our coffee is roasted in Michigan - Grand Rapids Roasters in Grand Rapids and Evelyn Bay in Brooklyn, MI. We sell Lighthouse dressings made in Lowell and kettle corn from Grand Rapids. We sell teas from Traverse City.
As I was working on some paperwork …
Post a Comment
Read more

Thanks to Lil Amy for telling me about Sound Cloud. 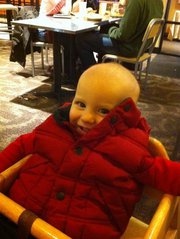 So - Amy is in Texas for a few months and I wanted her to hear a little song I recorded for Hunters first birthday - was wondering how to get it to her and she told me about Sound Cloud. What a cool place - small timers like me can store up to 120 minutes of our "sound files" - be they music, poetry, or whatever - there for free. You get more storage space and features for a nominal fee of $40 US a year.

Sound Cloud was a great recommend - thanks Amy.