Showing posts from October, 2012
Show all

Stuff That Works - A Review of Avon Gripster Tires. 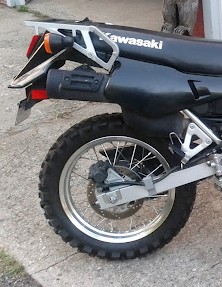 Bought a new to me 2007 KLR 650 a couple thousand miles ago and it had some knobbie tires on it. As someone with a non-dirt riding background, knobbies on pavement have always made me a tad nervous. While I am no knee draggin' stunt boy, I do enjoy leaning into corners and doing so with knobbies has always made me THINK about my tires - something I do not want to do whilst enjoying my lean.
Thankfully the knobbies on the KLR were near the end of their lives after riding on them for a couple of months. (If they were original tires, then they have 10k on them.)
When I told him that I was riding mainly on pavement with some dirt/gravel roads thrown in once in a while, the service guy Luke at Treds n Sleds on 29th Street in Kentwood, recommended the Avon Gripsters. I went online for reviews and people seemed very happy with them, so we set a time for them to be installed.


I love these tires! Have had them on for a little over a week - just shy of 300 miles and I could not be happier.…
2 comments
Read more 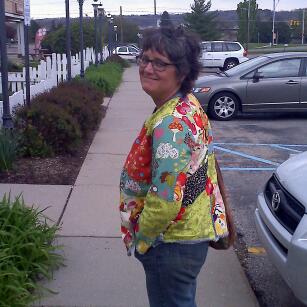 Rachel Culp makes stage clothes for rock stars AND she makes cool duds for us regular folks as well. I cannot remember how I first found Rachel's work - I think it was a link or reference from a Todd Rundgren fan site or from his own site. (Rachel has been making stage clothes for Todd since the days of Utopia.) Anyway, I saw some of her work on her Etsy webpage - and when I saw this jacket, I just knew it would be perfect for Julie. I was correct (even a blind squirrel finds an acorn every now and then) and she loves it. It looks great and wears well.

If you know my wife, you know all these flowers and wild colors are just the kind of thing she would want to have in a jacket!


Fast forward a few months and Rachel put something up on her Facebook Page about a new series of items she had done using images of Todd Rundgren. Well - DANG - I have been a huge fan of Todd since uhm, 1972 or so (yeah, I was in kindergarten when I started listening. I was a progressive 5 year old).
Lo and…
Post a Comment
Read more
More posts