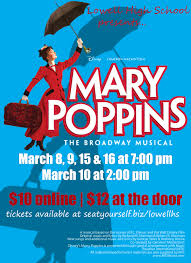 In spite of the glowing reviews and the buzz around Lowell, I was NOT prepared for the fantastic performances that blew me away last night when Mary Poppins hit the stage at the Lowell Performing Arts Center.

A bit of background - I was lucky enough to be a part of the Hope College Summer Repertory Theater when I was in high school. They let something like 15 or 20 high school kids from around the state participate as Theater Apprentices. I was exposed to professional actors, directors, and tech people as well as talented Hope College musicians and actors. For a couple of years after that I was a lighting tech for the Civic Theater, Spectrum Theater, and Circle In The Park (when it was in John Ball park and the lights/sound were done in a booth we climbed up a ladder to get in). I once owned a jingle studio up north and partnered with a coloratura soprano who had toured the country. Lastly, I ran sound for the WITL-O-Meters, the house band from WITL-FM in Lansing and we opened for the likes of John Anderson, Tim McGraw and even Country Music legend Johnny Cash. I shook his freaking hand and his crew were a delight - both bands had lefty drummers and they let our guy use their drum kit for the sake of expediting the change over between bands - they let us tap into THEIR sound system instead of making me set up and tear down ours.

My point - I have been around talented people of all ages in a lot of situations. Now, let me repeat: I was not prepared for the level of talent that knocked me out of my seat last night. If I said it to one cast member after the show, I repeated it to 20. Wow. Wow. Wow.

The stars of the show get most of the love, but as a former back stage worker, I know how important each and every member of the cast and crew are to any production. If a stage hand doesn't get that prop or piece of furniture in the EXACT right spot, it can throw off the dialogue or a song. Sound and lighting cues have to work or the audience could miss something crucial. Even the smudged face, chimney sweeps who took us to our seats played an important part in setting the tone for our evening. My heartfelt thanks and applause extend to everyone involved. You kicked major butt.

Even though I could - I do not want to single out any of the talented performers because the ENTIRE experience; the effort of each musician, actor, director, costume maker/changer, chorus member or ticket taker all worked together to provide a wonderful evening for Julie and I. My only complaint - there was something in the air that caused my eyes to water more than once last night.....

Thank you so very much each and every person involved - even the parents who had to shuttle their kids to rehearsals and possibly hear the same dialogue/songs over and over and over.You all did a superb job of creating the magic of theater on a cold March night in Michigan. BRAVO. 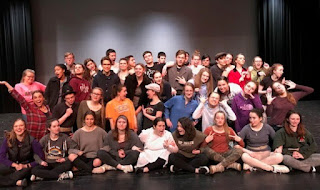 The words above provide me an excellent segue into the last portion of this love letter. Thanks to the Lowell Area Schools - tax funded public schools - for making this happen.

Our United States Secretary of Education, Betsy DeVos, has taken her efforts to de-fund and dismantle public schools from the State level to the national stage. In my opinion, if she has her way and succeeds in the tearing apart of public schools the magic we all experienced last night will not be possible. There is POWER in the collective. Do you think a Charter school serving a small amount of students would have had the fiscal or physical resources to put on a production that involved the vast number of people that Mary Poppins did? No way.

The Lowell Performing Arts Center seats 725 people. The place was packed - but lets allow that not every seat was filled - maybe 20 empty? The talent of everyone involved still impacted 700 men, women, and children last night. I know they felt what we did because of their response. We enthusiastically clapped along during two or three of the numbers and rose to our feet in appreciation at the end of the show.

How about the life changing positive boost each one of the cast and crew can receive from an experience like this? How much can it impact a chorus member or scenery mover to see and hear an audience rise to its feet clapping loudly for a job well done? I would wager that having some stranger come up to you backstage and sincerely thank you for sharing your talent is every bit as impactful as sinking a game winning free throw. Both experiences are available through properly funded public schools.

A final shout out to each and every one of the Practically Perfect People who worked together to far exceed the expectations I had when I took my seat last night. It is my sincere hope that you receive at least some measure of the delight I experienced as I marveled at the culmination of all of your efforts.  Thank you.
Lowell Music My Opinion On .......stuff Political Stuff Positiveness Random Thoughts Stuff That Works Things Michigan

Mackenzie said…
Thank you so much for your support and kind words for our musical. They moved us to tears as we read your letter. We put all of our heart and soul into this musical and we are so happy you enjoyed it as much as we did. We hope you will come back next year.
March 17, 2019 at 5:59 PM

Popular posts from this blog

May 29, 2011 - This post has been up since June 2008. I am amazed at the number of people who read it. There are several hundred page views every month. Please take the time to read the various comments after my post. In addition to some success stories, I have been diligent to put up comments from people who don't agree with my thinking and/or experience on this matter. My purpose in writing this was NOT to try to convince others to do what I did, but rather to share my experience. Anyway - since doing this I have not had any further issues with gallstones or pain (knock on wood, toss salt over my shoulder, etc. etc.).
I am not trying to replace a visit to the doctor, just sharing what I did and inviting others to share their experience - even when it does not line up with mine.

January 8, 2012 - the comments and readers keep coming. I thought I should mention one more thing. If you take the time to read all the comments you will find some variations on the recipe I followed. I me…
Read more

We always get some ants in the late spring/early summer at our house. It is an annual tradition. Usually they are around for a week or two and then they take off for parts unknown. This year they must have decided our house is a very, very, very fine house indeed. Found them in the sugar, they massed in the dishwasher, but when I poured out a few dozen of them along with my cereal one morning, I knew I had to draw a line in the sugar.

Time to poison the little bastiges.

On my weekly visit to the grocery store I was looking for ant killer and was trying to find a bottle of Terro liquid. The ONLY thing they stocked was the Raid Ant Bait thingies pictured here:
Since I had no choice, I bought some. I bought two boxes of 4 and followed the instructions by putting them in the ant paths I could see. Put one under the sink, up by the sugars, in the cereal cupboard, one in the corner in the dishwasher (with just 2 of us in the house now we only run it every 4-5 days) and several along the co…
Read more